Posted on May 4, 2011 by stephaniejnelson 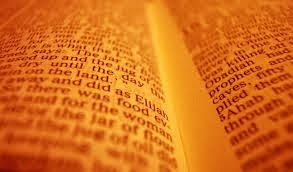 Because I mentioned Eziekel 18:23 on Sunday evening in the wake of Bin Laden death, I managed to stir things a bit. I’ve had more time to process what I was feeling and experiencing (and yes, I cried again earlier this evening, as I read Jim Wallis’ response to this issue (www.huffingtonpost.com/jim-wallis/how-should-we-respond-to-bin-laden-death_b_…). No, I haven’t changed my mind. I don’t anticipate that I will. But watching several people on twitter and facebook throw out scripture to support whatever opinion they had was interesting and sometimes painful for me.

I do believe that all people, with good guidance, can come to understand scripture better, and certainly “as a whole”… knowing that while it’s hard to understand, it does not contradict itself. Just because I have been to seminary and perhaps have an understanding of proper exegesis a bit more than the person who hasn’t doesn’t mean I am smart or better or that everyone can’t understand, too. I am an educator at heart, and wish to respond to this verse (Ezekiel 18:24) which was one of several thrown out by those who oppose my view, after citing the verse just before it.  I believe in the importance of taking his word seriously and thoughtfully

Sidebar: In case you aren’t sure of my view, here’s where I am at: while I am relieved Bin Laden was captured and is no longer a threat in the war on terror, I cannot, in good conscience, celebrate his death… because he is a lost soul. I tried to picture Jesus Christ in the crowds of people surrounding the White House and who gathered at Ground Zero, and I realized he wouldn’t be waving a flag, and chanting “U.S.A.” in celebration. Jesus taught us lessons in parables, and the parable of the Lost Sheep is one that first comes to mind. The Lord pursues us and wants us to come to know him, and he would leave the flock to find just one who is lost. What compassion and love! He wouldn’t rejoice over one who has rejected him, but would weep for his lost soul. Because I believe this, in no way means I discount God’s wrath. The two are simply not mutually exclusive. I can believe in his compassion and his justice without compromising the gospel. After all, Jesus’ very act of the cross proves my point.

But when a righteous person turns away from his righteousness and does injustice and does the same abominations that the wicked person does, shall he live? None of the righteous deeds that he has done shall be remembered; for the treachery of which he is guilty and the sin he has committed, for them he shall die.

In the case of this passage, the prophet Ezekiel is speaking of God’s judgement on Judah and Jerusalem. The city of Jerusalem fell in 586 B.C, and Ezekiel was sent to prophecy about the visions God gave him beginning in 593 B.C. Honestly – I find Ezekiel to be one of the most difficult books in the bible to understand. It’s hard to get through. It’s repetitive and sometimes confusing. But the more we know about its purpose (i.e. the original audience the book was written to, as well as the original audience that Ezekiel was speaking to) helps us comprehend it better.

At first glance, one would almost think this verse points to the Arminian view that a person can loose their salvation. And if you can loose your salvation, than it stands to reason you can earn your salvation. (Ephesians 2:8-9 tells us this isn’t how salvation works.) So where does the good comes from? Us? Nope. There are two reasons why this isn’t the case: First, there is no one righteous without the grace of God. We are born in sin (Psalm 51:5) and are only able to choose good because of his grace (Romans 2:15). Knowing this, we have to look at the verse a bit more to fully understand it, because as I said earlier, the Bible doesn’t contradict itself, so closer examination is necessary.

Here’s the kicker: Verse 21 and 22 consider the wicked person who then repents and lives rightly before God. Verse 24 considers the opposite scenario. Sandwiched between these is the central declaration of God’s “pleasure” (verse 23… the verse I cited) in repentance, and a denial that he has any pleasure in the death of the wicked. (My source here is the ESV study bible)

To further prove my argument from verse 23, (that the Lord doesn’t delight in the death of anyone), is Ezekiel 33:11:

Say to them, As I live, declares the Lord GOD, I have no pleasure in the death of the wicked, but that the wicked turn from his way and live; turn back, turn back from your evil ways, for why will you die, O house of Israel?

There is no way I could fully cover this topic, (I’m not smart enough!… and I have a life) but I hope this briefly illustrates the importance of not taking scripture out of context. And to close, I will also say that while this verse (24) does say that a wicked person will die, it STILL doesn’t support the idea that we can rejoice in such death. We are called to live lives that honor the Lord and reflect his image back to the world. If God doesn’t take pleasure in the death of the wicked, why on earth should I?

Posted via email from come what may